This map depicts annualized earthquake loss by county. The estimated losses consider the value of buildings in each specific area. (Public domain)

Reston, Va. — Earthquakes are estimated to cost the nation $6.1 billion annually in building stock losses, according to an updated report published by the Federal Emergency Management Agency (FEMA). U.S. Geological Survey (USGS) science on earthquake hazards was a critical component to this analysis.

The new loss estimate represent a 10 percent increase over the previous estimate in 2008, but when accounting for inflation changes there is a net small decrease (when both the 2008 and new report results adjusted to 2014 dollars). The changes in loss estimates are mainly due to changes in population and building exposure, estimate of long term earthquake hazard and an improved site soil characterization adopted in the present study.

In 2014, the USGS released an updated assessment of earthquake hazards and potential ground shaking across the nation. This was used as an essential piece to inform the FEMA analysis, which combines that insight with consequences in terms of physical damage and economic loss.

USGS earthquake science is vital because you can’t plan for earthquakes if you don’t know precisely what you are planning for. Those USGS maps reflect the best and most current understanding of where future earthquakes will occur, how often they will occur, and how hard the ground will likely shake as a result. The USGS regularly updates the national seismic hazard models and maps, typically every six years, in sync with the building code updates.

In addition, the USGS provided new insight on soil characteristics across the nation to help understand the intensity of ground motion following an earthquake. If a structure is built on soft soil, it is more likely to have stronger shaking compared to harder bedrock. With limited data available, the 2008 FEMA analysis assumed the worst case scenario and considered the nation uniformly as if it was on soft soil. For this new report, the USGS produced preliminary maps to estimate soil classifications in different areas. Further research and testing will allow for more precise maps of soil characteristics.

The USGS is the only federal agency with responsibility for recording and reporting earthquake activity nationwide and providing a seismic hazard assessment. These USGS earthquake hazard maps are part of contributions to the National Earthquake Hazards Reduction Program (NEHRP), which is a congressionally established partnership of four federal agencies with the purpose of reducing risks to life and property in the United States that result from earthquakes.

The main updates to earthquake hazards since the 2008 FEMA report include:

Earthquake hazard has remained relatively stable except for the regions of induced seismicity. Induced seismicity is not included in this report because it can increase or decrease over a short period of time and is subject to commercial and policy decisions that could change rapidly. This report looks at the long term while USGS induced seismicity maps are one-year forecasts.

Therefore earthquake hazards and losses are currently higher than what is reflected in this report for Oklahoma, Kansas, Colorado, New Mexico, Texas, and Arkansas where there have been recent occurrences of induced seismicity.

Need for loss and hazard estimates

Earthquakes in the last decade alone have claimed tens of thousands of lives and caused hundreds of billion dollars of economic impact throughout the globe. In the United States, earthquake risk continues to grow with increased exposure of population and development.

While there is constantly improved understanding of high hazard and risk areas such as Los Angeles, San Francisco and Seattle, there is also high risk of significant damage and loss in regions such as Salt Lake City, St. Louis, Memphis, Charleston, New York City and Boston even though they have low or moderate earthquake hazards. This high level of risk reflects dense concentrations of buildings and infrastructure.

Understanding earthquake hazards is critical for informed policies, priorities, strategies, and funding decisions to protect the most at-risk communities. 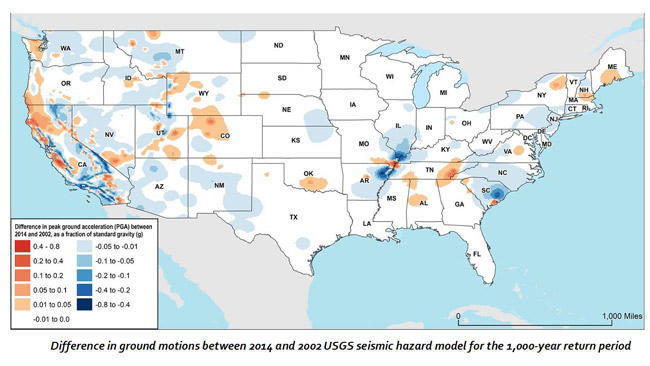 This map depicts the difference in USGS estimates of earthquake hazards across the nation in 2002 and 2014. The new FEMA earthquake loss report includes the 2014 data, while the previous 2008 report includes the 2002 data. The negative values represent a decrease in estimated hazard since 2002 and the positive values represent an increase. (Public domain.)

Microban International to put antimicrobial additives in the driving seat at...

Technology to extract energy from wastewater to be installed in a...