Toronto — Green Roofs for Healthy Cities (GRHC), the North American green roof and wall industry association, announced that the industry grew by double-digits in 2016 according to its 2016 Annual Green Roof Industry Survey. For the first time, GRHC Corporate Members reported that Toronto, Ontario had the most square footage of green roofing installed in 2016, with Chicago, Washington D.C., and Seattle following. 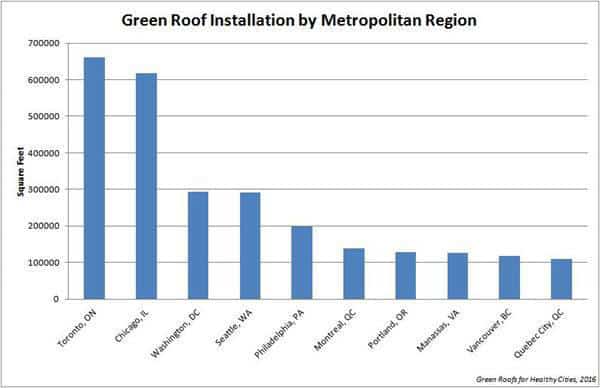 “It’s no small feat that Toronto has been recognized as the leading city for green roof installation in North America,” said Jennifer Keesmaat, Chief Planner for the City of Toronto. “Our Green Roof Bylaw, in effect since 2010, has resulted in a new roof-scape for Toronto, cooling the city, helping to mitigate water runoff, while also adding beauty and biodiversity. A whole new industry has been spawned as a result of this initiative.”

The North American green roof industry experienced an estimated 10.3 percent growth in 2016 over 2015. The survey results also point out that there were several new municipalities reporting green roof construction in 2016.

According to the 2016 survey, corporate members recorded 889 projects in 40 US states and six Canadian provinces, installing 4,061,024 square feet of green roofing.

“GRHC’s annual Green Roof Market Survey is vital to our understanding of the health and direction of the industry. We use the information contained in the Survey to identify new geographic priorities, to contextualize our business growth relative to the overall industry, and to determine potential gaps that we want to fill,” explains Matt Barmore of Greenrise Technologies, and Chair of GRHC’s Corporate Members Committee.

Although the green roof market continues to grow, there is still an enormous potential for new green roofs to be installed on tens of billions of square feet across North America. Strong policy support in cities like Washington, D.C. and Toronto is driving market growth. Green Roofs for Healthy Cities encourages municipalities, regions, states, and provinces to adopt policies in support of green roofs and green walls to build healthier, more sustainable and resilient communities.

UAVs and the New Autonomous Reality