Bismarck, N.D. — The North Dakota State Water Commission and U.S. Department of the Interior’s Bureau of Reclamation have been granted permission to proceed with efforts to restart construction on the Northwest Area Water Supply (NAWS) project in the wake of a positive ruling by the U.S. District Court for the District of Columbia.

Construction of the NAWS project began in 2002 but was halted by a court injunction due to concerns about invasive species and an inter-basin transfer of water. Additional environmental studies were completed and, although some construction was allowed to continue throughout the project history, The recent ruling allows for the project to move forward, with the goal of delivering water from the Missouri River to the city of Minot and the surrounding area. 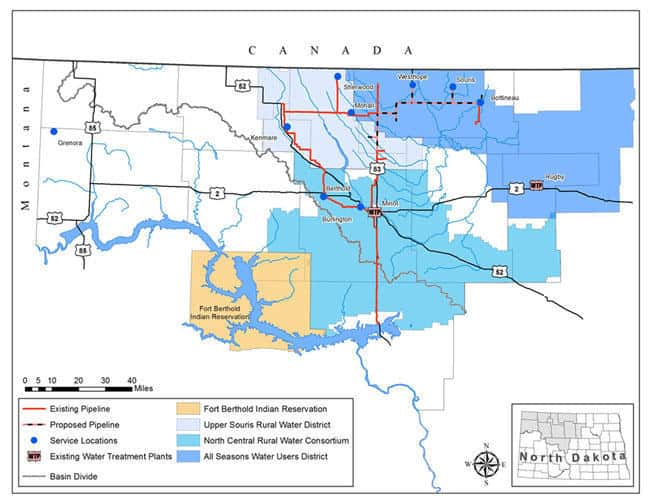 “This is a major milestone for a Federal project which will ultimately deliver high quality drinking water to people in North Dakota,” said State Engineer Garland Erbele. “The completion of this project will address the well documented water supply needs within the north central region of our state.”

The Federal court ruling follows completion of an August 2015 Record of Decision (ROD) addressing invasive species and inter-basin water transfer concerns. The ROD identified the use of Missouri River water with subsequent advanced water treatment before it crosses the Basin Divide. This water treatment will provide flexibility in addressing long-term Safe Drinking Water Act standards to provide a safe and reliable drinking water supply to this region, while providing additional benefits for biota treatment.

“The next steps allowed by this ruling include the design and construction of a water treatment plant located near Max, N.D., and water intake that will withdraw water from Lake Sakakawea,” said Bureau of Reclamation Area Manager Arden Freitag.

To learn more about the project visit www.swc.nd.gov/project_development/naws.html or www.usbr.gov/gp/dkao.

Microban International to put antimicrobial additives in the driving seat at...

UAVs and the New Autonomous Reality