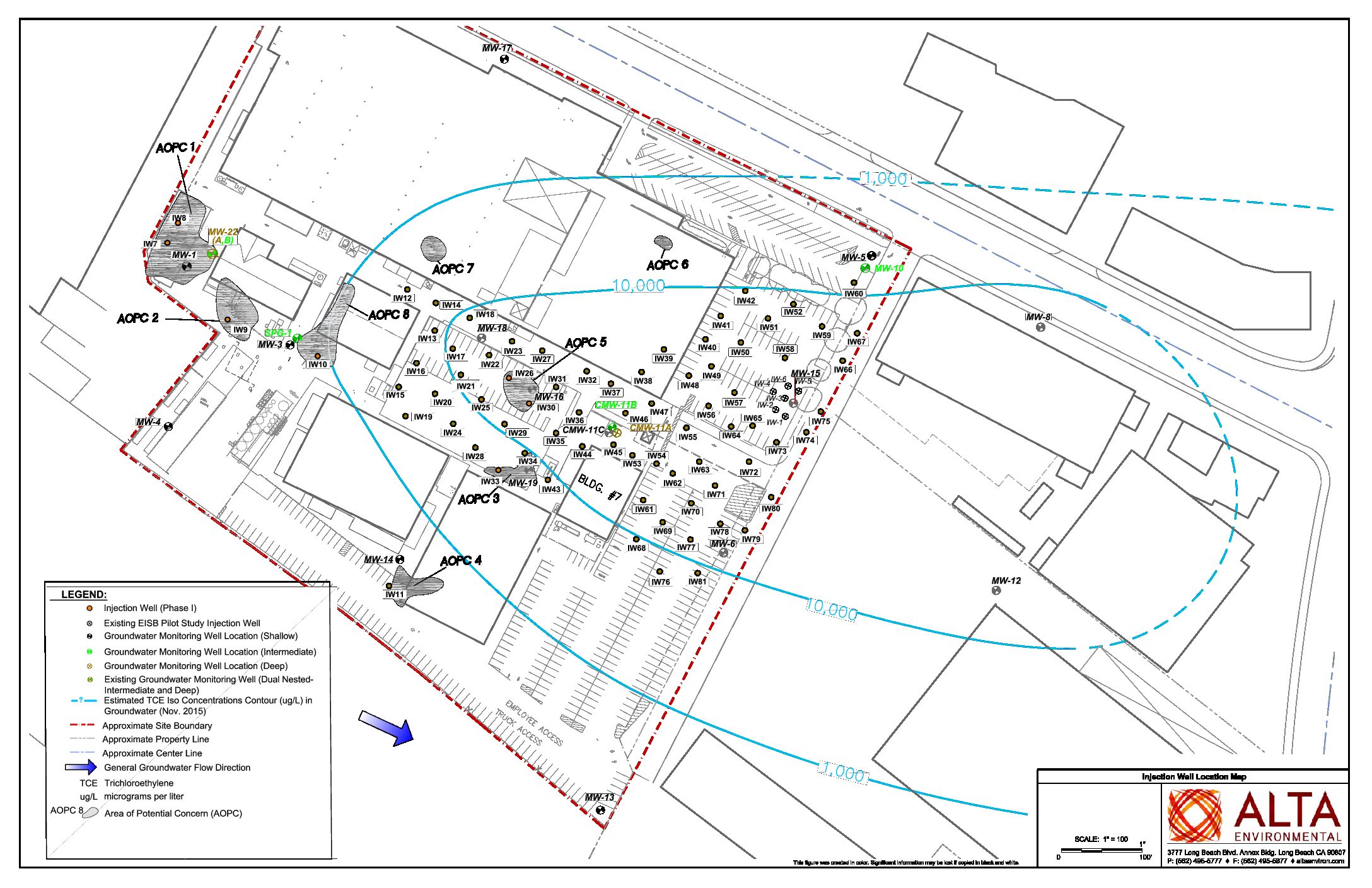 Elevated levels of chlorinated solvent compounds, such as tetrachloroethene (PCE) or trichloroethene (TCE), are often present in groundwater beneath sites where manufacturing and industrial operations have occurred. An innovative technology known as Enhanced In Situ Bioremediation (EISB) is being used to cost-effectively treat these contaminated sites. EISB, or engineered bioremediation, is the acceleration of microbial activities to enhance the degradation or detoxification of environmental pollutants in an anaerobic environment. The purpose of EISB is to increase the rate of microbial activity so the rate of reductive dechlorination is increased.

Chlorinated solvents generally biodegrade under anaerobic conditions where the chlorinated solvent (and/or another carbon source) is consumed by microbes present in the aquifer. During reductive dechlorination, anaerobic microbes substitute hydrogen (electron donor) for chlorine on the chlorinated compound molecule, thus converting the molecule to a degradation product with one less chlorine atom. This is the process whereby PCE is degraded to TCE, then to cis-1,2-dichloroethene (DCE), to vinyl chloride, and then finally to ethene (which is benign). EISB therefore eliminates harmful chlorinated compounds or converts the compounds into harmless byproducts. EISB is cost-effective and efficient because it is applied in situ without major disruption to ongoing business activities.

EISB utilizes amendments such as oxygen, electron donors, ferrous iron, liquid-activated carbon, or microorganisms to treat groundwater impacted by chlorinated compounds. These amendments are used to create or enhance the site conditions necessary for the biodegradation to take place.

3-D Microemulsion® (3DME) is an example of an electron donor amendment used in EISB to aid in the anaerobic biodegradation of chlorinated compounds. 3DME is an injectable, highly-distributable liquid material specifically designed for in situ remediation projects where the anaerobic biodegradation of chlorinated compounds through enhanced reductive dechlorination (ERD) processes are possible.

In some cases of EISB, a combination of amendments are used to create optimal remediation conditions. For example, 3DME can be mixed with a technology called Chemical Reducing Solution® (CRS). CRS is a soluble, food-grade source of ferrous iron designed to precipitate reduced iron sulfides, oxides, and/or hydroxides. CRS is used in conjunction with 3DME to provide the necessary iron to activate the abiotic chemical reduction of chlorinated organic groundwater contaminants, such as PCE, TCE, DCE, and vinyl chloride. The end products of these biogeochemical reductions are ethene and ethane.

EISB technology also addresses the issue of slow biodegradation of intermediate compounds. Bio-Dechlor INOCULUM Plus® (BDI Plus) is an amendment used to accelerate the complete dechlorination of these intermediate, recalcitrant contaminants. BDI Plus is an enriched, natural microbial consortium containing species of Dehalococcoides sp (DHC) capable of completely dechlorinating contaminants during in situ anaerobic bioremediation processes.

EISB is used for remediation at a wide range of manufacturing and industrial sites with chlorinated solvent contamination. For example, at a confidential aerospace manufacturing facility located in Southern California that is under the regulatory oversight of the Los Angeles Regional Water Quality Control Board (LARWQCB), a combination of 3DMe, CRS, and DHC was used to treat the core of a major TCE plume measuring ½ mile long by ¼ mile wide. A total of 75 dual-nested injection wells were installed onsite throughout the TCE plume area. Fifty-five (55) of the wells were installed within the core of the plume where TCE concentrations exceeded 10,000 micrograms per liter (µg/l), equivalent to parts per billion.

The wells were installed on an approximately 30-foot by 60-foot staggered grid pattern, screened at 88-98 and 103-113 feet below ground surface (bgs). The wells were then injected with a solution of 3DMe, CRS, and BDI Plus, manufactured by Regenesis. One application of 287,194 pounds of 3DMe, 114,418 pounds of CRS, and 1,964 liters of BDI Plus (DHC) were injected into the 75 dual-nested injection wells. A total of 701,616 total gallons of the mixed 3DMe/CRS/DHC solution were injected. In accordance with the Monitoring & Reporting Program directive issued by the LARWQCB, baseline and post-injection groundwater monitoring and sampling at selected groundwater monitoring wells was conducted on a quarterly basis.

Groundwater sampling results revealed that TCE was reduced in the primary observation well from as high as 25,000 µg/l to less than 100 µg/l (after one year after injection). TCE concentrations in some of the other monitoring wells located within the injection area were reduced by approximately 50 percent to 90 percent. Degradation products cis-1,2-DCE and vinyl chloride, and significant increases of DHC, carbon dioxide, methane, dissolved iron, and total organic carbon were also detected in the primary observation well. The effects of the full-scale injections are continually being evaluated in the wells on a triannual basis.

Another example of the use of EISB technology was illustrated at a former manufacturing site in Michigan. This site was successfully treated with a combined remedy approach using 3DME, DHC, and PlumeStop®, a colloidal activated carbon. At this site, former industrial manufacturing activities released chlorinated compounds into the shallow groundwater resulting in a ¼-mile-long contaminant plume. The groundwater plume was treated with a multi-phase ERD approach using 3DME, PlumeStop, and DHC. This cost-effective approach significantly reduced the contaminant plume and created conditions for the long-term biodegradation of residual chlorinated compounds.

A further example of the success of EISB is seen at a Santa Barbara manufacturing site. This site formerly conducted manufacturing operations leading to PCE and TCE groundwater contamination. Previous remediation attempts were unsuccessful in achieving site goals and site closure. The goals at this site included the rapid reduction of chlorinated compounds in groundwater and preventing further downgradient migration of PCE and TCE. PlumeStop, Hydrogen Release Compound® (HRC), and DHC were chosen because they provided a safe and efficient solution for the site. A pre-field remediation test was conducted to confirm the use of this technology. This test led to cost-saving adjustments in the site design, reducing project costs by 30 percent. The EISB approach successfully eliminated the contaminants and created conditions for sustained treatment at the site.

One of the primary advantages of EISB is that it can be performed in situ. This allows the site to be treated without removing the bulk soil, saving both time and money. In situ treatment is also beneficial because it provides safer conditions for site workers and can be completed with lower operating costs compared to conventional pump and treat methods. EISB can be applied at a wide variety of industrial and manufacturing sites with chlorinated solvent contamination. In comparison to chemical oxidation, pump and treat, and electrical resistance heating, EISB is often both more efficient and less expensive. EISB utilizes amendment technology to efficiently eliminate environmental pollutants in anaerobic environments and is a proven remediation solution for chlorinated solvent contamination.

Steve Ridenour, PG, Senior Geologist III of Alta Environmental, an NV5 Company. He has 28 years of environmental consulting and compliance experience, with a focus on municipal and industrial clients. He is responsible for the management of site assessment and remediation projects, and leads the design and implementation of groundwater remediation projects such as Enhanced In-Situ Bioremediation (EISB) and dual-phase extraction (DPE), including evaluation of soil and groundwater analytical data, interpretation, and reporting. Steve Ridenour can be reached at Steve.Ridenour@altaenviron.com.