Creative Lifting Services (CLS) completed a trial with Vita Industrial to test the company’s Load Navigator on a recent tower crane erection in Colorado. The Brighton-based company was seeking a way to increase the efficiency and safety of erecting a tower crane in a crowded city center with multiple obstacles on the jobsite.

CLS handled the lifting work for the construction of a new high-end hotel in a bustling section of downtown Boulder. As with most projects in high-traffic city centers, the project presented tight working quarters on the jobsite with vehicle and pedestrian traffic, nearby buildings, and other obstacles. 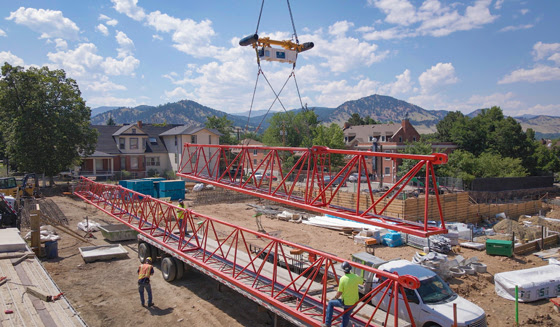 The Vita Load Navigator enabled CLS to eliminate the use of taglines on the site, which made the tower crane erection more efficient, more precise, and much safer. It uses load stabilization technology, which features high-powered thrusters that eliminate load movement during crane lifts, enabling riggers to remotely stabilize loads and precisely place them via remote control.

“One of the biggest challenges we have when erecting a tower crane is running long taglines through a congested jobsite. Using Vita’s system can eliminate that,” said Josiah Rausch, crane tech manager for CLS. “We also usually try to stage the crane sections as close to the base of the tower as possible but on this job we couldn’t, due to the tight working quarters of the site.”

CLS staged sections of the tower crane on an adjacent street. The loads were then picked from behind the crane using a mobile crane outfitted with the Load Navigator. The loads then swung across the jobsite to be added to the tower crane assembly. The loads were guided and placed via the Load Navigator’s remote-control system, which features a “handshake” feature enabling crew members to pass control of a load depending on where it is on the jobsite. The Load Navigator can position and reorient loads within 1° of accuracy, providing precision placement, and it can handle loads up to 40 tons.

Rausch said the precision with which the Load Navigator was able to guide and place loads was particularly useful when constructing the tower crane’s T-sections and counter deck. 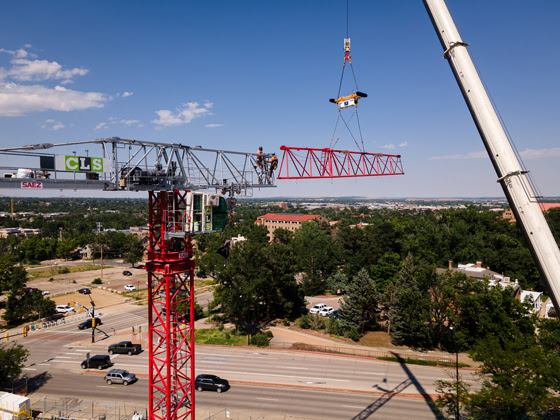 “Using the Vita Load Navigator meant we did not have to run through an obstacle course, making it much more efficient and safer for the crew,” he explained. “The guys at the top of the crane were happy with the process — instead of coordinating with two tagline operators on the ground, the crew was able to guide it in via a remote. Communication can be a major issue on construction sites. Heavy machinery and bustling operating environments make a lot of noise. The remote function really solved that issue.”

CLS used the Load Navigator on site for 2 days and considers the trial a complete success. Rausch said the company looks forward to using the product in future operations.

“On jobs where we are working in tight spaces this technology is incredibly helpful,” he said. “We really see a tremendous application for panel lifts, pre-cast concrete, or any job with repetitive picks.”