Last September was full of important milestones for the BESIX and Orascom Construction teams working jointly on the Grand Egyptian Museum in Cairo, Egypt, just off the plateau of the Pyramids of Giza. Mid-September, the joint venture took a significant step towards completion by delivering substantial parts of this cultural masterpiece. Egypt’s Prime Minister, Dr. Mostafa Madbouly, visited the Grand Egyptian Museum on 24 September to oversee the progress. Finally, last week, the joint venture had two additional reasons to celebrate: on 27 September, BESIX and Orascom Construction won the Autodesk Excellence Award 2022 for Best Construction Project for their use of BIM software. The software allowed them to smoothly coordinate the more than 150 subcontractors on the project. To end the month, the project teams also celebrated another impressive safety milestone: 20 million man-hours without any severe incident.

The delivery of additional parts of the Grand Egyptian Museum, recently signed by both the client, the Ministry of Antiquities, and construction partners BESIX and its Egyptian partner Orascom Construction, means that the client is now increasingly ready to operate the museum facility in view of welcoming visitors in the nearby future. The completion rate of the main building and overall site is now at 99.8%, while that of the security systems is at 97%. BESIX and Orascom Construction are also finalising a number of exhibition areas, awarded to them last year.

Interior of the Grand Egyptian Museum in Cairo, Egypt

Visit of the Prime Minister

On 24 September, Major General Atef Moftah, General Supervisor of the Grand Egyptian Museum, guided Egypt’s Prime Minister Dr Mostafa Madbouly and a delegation of dignitaries around the museum complex. During the visit, the Prime Minister stressed the importance of the project and the invaluable artefacts that will be displayed there for Egypt’s tourism sector. He also reiterated his desire to be able to open the museum to the public as soon as possible. Once inaugurated, the Grand Egyptian Museum will be the largest archaeological museum in the world dedicated to a single civilisation. 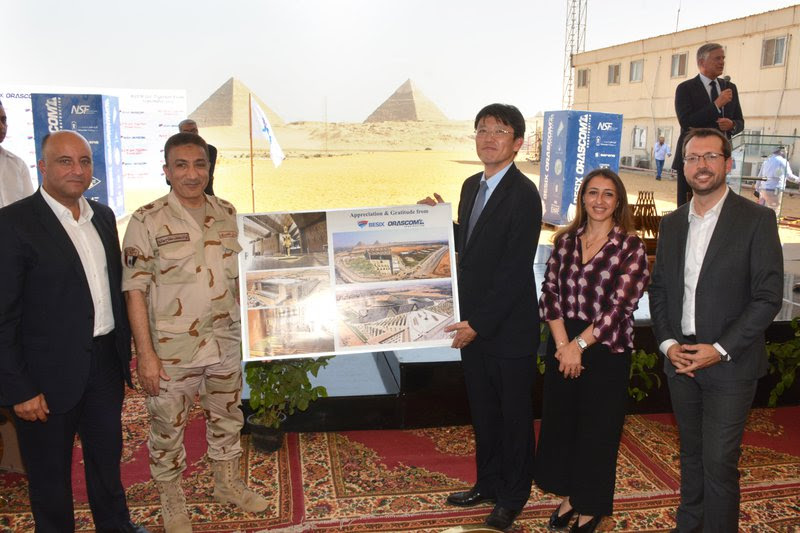 Not only the size of this project, but also its complex design required excellence in coordination.  To manage it all, BESIX and Orascom Construction used BIM software for the first time in Egyptian construction history. The Autodesk software helped the teams visualise 3D models, coordinate the planning of the more than 150 subcontractors and reduce adjustments to executed works through advanced clash detection. Due to the unique nature of this project and the exemplary application of the BIM software, the Orascom Construction and BESIX joint venture won the Autodesk Excellence Award 2022 in the Best Construction Project category on 27 September. 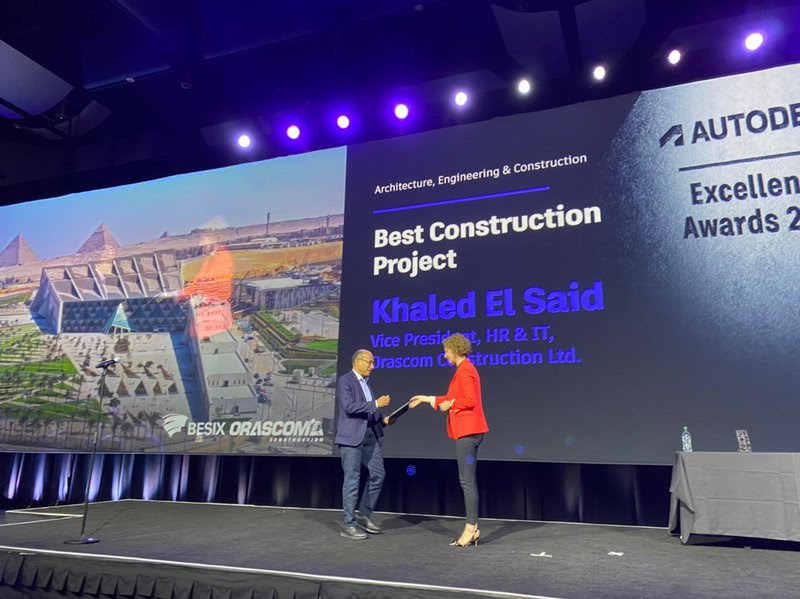 In addition to this award, the project team had more reasons to celebrate. The Grand Egyptian Museum broke all records with a total of no less than 115 million man-hours since the start of the project. Of these, the last 20 million man-hours were carried out without any severe incident. An inimitable achievement on a project of such magnitude!

About the Grand Egyptian Museum

The BESIX-Orascom Construction joint venture is building the Grand Egyptian Museum for the Egyptian Ministry of Antiquities, the largest museum in the world dedicated to a single civilisation and one of the largest structures in Egypt since the pyramids. Besides thousands of objects documenting the greatness of Ancient Egyptian civilisation, Pharaoh King Tutankhamun’s treasure is also part of the collection. About 5,300 objects from that treasure will be on display for the first time since their discovery in 1922.

The Grand Egyptian Museum is a building of rare complexity built on the Giza Plateau in perfect line and respecting the angles formed by the three pyramids. With a total surface area of 490,000 m², the building constructed by BESIX and Orascom Construction required unprecedented technical feats in contemporary construction. For instance, ceilings as high as 32 metres in several places are made of white concrete or steel structure, and include architectural lines running throughout the building. In addition, some areas present magnificent cantilevers of up to 26 metres long, as well as iconic stilettos, i.e. steel structures of up to 26 metres high, clad in marble that end on the floor in a single point, making them look like inverted pyramids.

Besides building the complex, BESIX and Orascom Construction also engineered more than 30 particularly demanding MEP and ICT systems in line with the size and needs of the building. Finally, the client also entrusted them with the delivery of exhibition galleries, a conference centre, educational facilities and a dedicated museum area for King Khufu’s renowned wooden boat.

BESIX is a leading Belgian Group, based in Brussels and active in 25 countries and on 5 continents, in the construction, real estate development and concessions sectors. BESIX Group has been active since 1909 and its iconic realisations include the Burj Khalifa in Dubai, the highest tower in the world, European Parliament buildings in Brussels and the Grand Egyptian Museum, on the plateau of the pyramids of Giza. The Group’s engineering department enables BESIX to carry out complex and unique projects, especially in terms of technical and environmental aspects.

Orascom Construction PLC is a leading engineering and construction contractor with operations in the Middle East, Africa and the United States and activities in the infrastructure, industrial and commercial sectors. The Group owns 50% of BESIX Group, develops and invests in infrastructure opportunities and has a portfolio of construction materials and facilities management.

Aiding after a Catastrophe: Autodesk and the Notre Dame Cathedral Fire