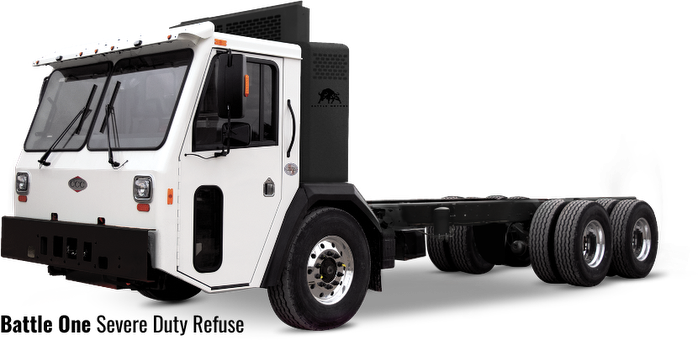 In February 2020, New York City mayor Bill de Blasio signed an executive order mandating a fully electric municipal fleet by 2040, furthering his December 2015 NYC Clean Fleet sustainability plan to create the largest electric vehicle fleet of any U.S. city and reduce NYC’s municipal vehicle emissions by half by 2025 and by 80% by 2035. De Blasio’s ambitious greenhouse gas reduction goal prioritizes the environmental direction of NYC by electrifying fleets, like garbage trucks, to benefit not only the environment but also residents and those working on and around the vehicles through significant reductions in noise and noxious gases
“Crane Carrier is proud to work with Liberty Ashe and looks forward to doing our part in electrifying the over 5,000 private refuse trucks in NYC,” says CEO of Battle Motors Michael Patterson. “The Battle One Severe Duty Refuse and Battle One Crew Cab trucks are workhorses with sophisticated engineering, best-in-class features, and quality that’s built to last. “
Battle Motors trucks have undergone 75 years of continuous improvements and are better driving machines purposely built for tackling even the toughest routes without sacrificing a comfortable, safe, and solid driving experience.
“The Battle One delivers the same comfort, visibility, and reliability as the CNG- and diesel-powered Crane Carrier LET and LET2, but champions lower maintenance costs, reduced noise, and zero carbon emissions, all of which are goals of Liberty Ashes, Inc. and the New York City. Rugged framework, attention to detail, and a durable yet ergonomic cab environment keeps New York employees healthy and safe and makes these vehicles an excellent investment” Says Sean Gilroy VP of Sales at Crane Carrier.
Liberty Ashes, Inc. will be one of the first private sanitation and recycling companies to purchase and utilize electric refuse trucks throughout the greater metro New York area, setting the standard for environmental clean energy impact. They intend to use power generated from eight of their own solar stations to charge the Battle One trucks. In the near future, they will be building a waste conversion facility in Jamaica, NY to convert 400 tons of municipal solid waste per day into renewable clean natural gas to fuel a fleet of the Battery Electric CNG vehicles to further reduce pollution, and remove additional truck waste out of New York City.