Washington, D.C. — The U.S. Department of Transportation’s Bureau of Transportation Statistics’ (BTS) has shown that all but one of the major freight modes grew since the recession that ended in June 2009 with rail intermodal growing the fastest, rising 50.6 percent from June 2009 (the end of the economic recession) to December 2016.

BTS reviewed recent movement of freight and determined that transportation services, as measured by the freight TSI, continue to lead the economy. The freight TSI tends to turn in advance of slowdowns and accelerations in economic growth.

The seasonally-adjusted indexed modal data that comprises BTS’ Freight Transportation Services Index (TSI) shows that rail intermodal was followed by trucking at 37.8 percent, pipeline at 29.6 percent, water­borne at 23.2 percent, and air freight at 21.7 percent. During this period the freight TSI rose 29.7 percent.

The sole exception was rail carloads, which declined 0.8 percent. The drop in rail carload shipments took place at the same time as a decline in coal shipments. Total coal shipped by Class I railroads peaked in 2008 at 878.6 million tons, dropped to 787.6 in 2009, and continued to fall to 638.1 million tons in 2015. 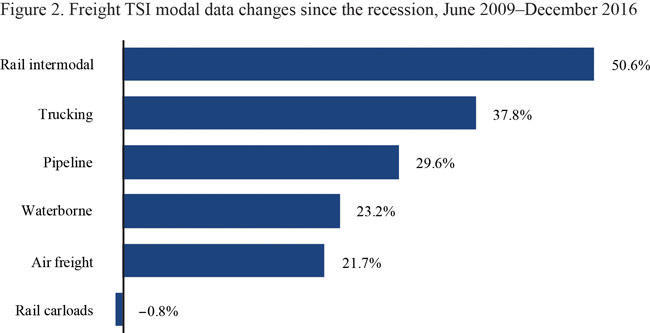 The freight TSI measures the month-to-month changes in for-hire freight shipments by mode of transportation in tons and ton-miles, which are combined into one index. The index measures the output of the for-hire freight transportation industry and consists of data from for-hire trucking, rail, inland waterways, pipelines and air freight. The TSI is seasonally-adjusted to remove regular seasons from month-to-month comparisons.

Transportation services and the economy

BTS has reviewed recent movement of freight and determined that transportation services, as measured by the freight TSI, continue to lead the economy. The freight TSI tends to turn in advance of slowdowns and accelerations in economic growth. The most recent data show two economic accel­erations following the recession; the first from June 2009 to December 2012 and the second from July 2013 to December 2014. The freight TSI led both ac­celerations.

First published in 2004, TSI measures the volume of freight and passenger transportation services provided monthly by the for-hire transportation sector. BTS research shows that changes in the TSI take place before changes in the economy, making the TSI a useful economic indicator. This relationship is particularly strong for freight traffic as measured by the freight TSI, which BTS research shows leads economic accelera­tions and decelerations in the economy (known as growth cycles).